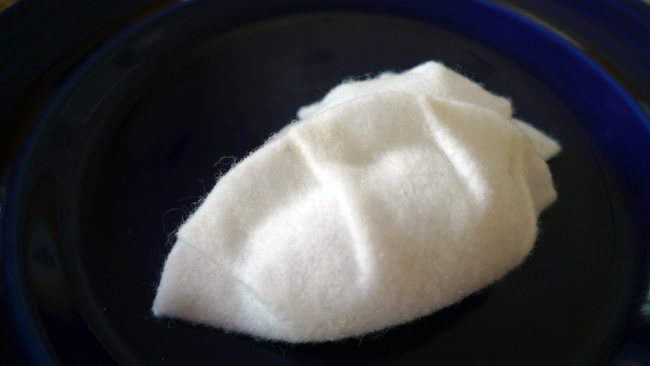 As a child, I would help my mother make dumplings (mandoo). Her technique was to pinch along the edge with both layers of the dumpling together. My Japanese sister-in-law likes to fold only one side as they are sealed together. She says it helps to keep the dumpling (gyoza) lay flat when steam-frying them Japanese style. For these felt dumplings, I used Mariko’s folding technique.

One of the tastiest way to cook dumplings is to steam-fry them, as I learned from Mariko. The resulting dumplings have a combination of textures with the softness of steaming and the crispiness of frying. It took me a bit of trial and error to master the art of steam-frying dumplings and I will post my tips in the future.

Mariko likes to make dumplings with ground pork or shrimp, along with tofu, shiitake mushrooms, scallions or Asian leeks, sake, soy sauce, sesame oil and ginger. I don’t have any measurements so here are some other dumpling recipes in the interim: