Tip: When working with acrylic paint on felt, seal the felt before applying.

Here’s what I learned through trial and error when working with acrylic paint on felt. 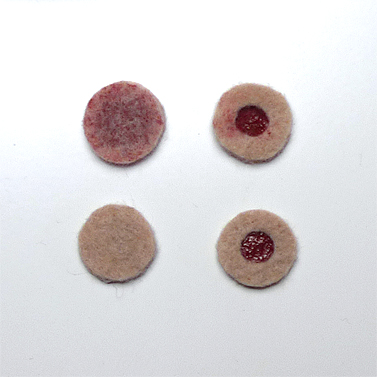 Because felt is so porous, the paint will bleed through (top example). You will need to seal it and in this case I used Mod Podge (bottom example). Mod Podge works well because it doesn’t get entirely absorbed through the felt and sits on the surface of the felt. Once the Mod Podge is dry, add the layer of paint.

It is important to note that paint will alter the texture of the felt and will make it stiffer. The nice thing about using Mod Podge is that although it stiffens the side of the fabric to which it is applied, the unpainted surface remains soft to the touch because it doesn’t absorb all the way through. The painted surface is also not as stiff as compared to other materials (Elmer’s glue, fabric glue).

Fabric paint works well for creating color with some volume, as it is described as “dimensional” paint. It gets absorbed by the felt as well.